Welcome to the world of yesterday! 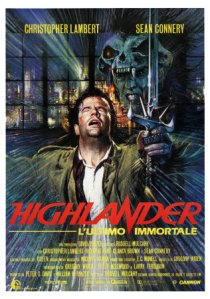 I know what you’re thinking, Highlander? He has to be joking? I’m afraid not people, Highlander is indeed one of my all time favourite films (next to Ghostbusters) so if you are of a weak disposition regarding this awesome movie please turn to another blog post now.

First time I watched Highlander was in the early 90’s and I didn’t really understand it, so I watched it again. Still didn’t get it, so I left it alone for a long time. When I started University in 2001 I decided to give it another go, this time on DVD, it certainly looked shinier than I remember and, apart from a few inexcusable 80’s hairdo’s, still felt like a recent movie.

I also realised it’s a film I can watch over and over again, no matter what. Always makes a good candidate for a favourite movie, one you can just sit down and switch off to (no pun intended), one you can feel good about afterwards, even if you know it might seem an odd choice to other people.

Highlander has certainly had to put up with a lot of criticism over the years, criticism which is unfortunately justified. The first film isn’t without its flaws but is superior to its successors in every way, truly “there should have been only one” However the series has been all but destroyed by a series of the worst sequels ever.

Highlander was directed by Russell Mulcahy and penned by Gregory Widen and released in 1986. If you didn’t know 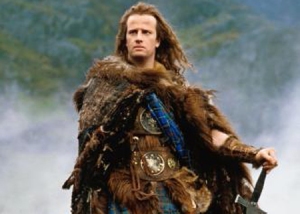 already, the film follows the story of Conner Macleod (Christopher Lambert) of the clan Macleod. He was born in the year 1518 in the village of Glenfinnan on the shores of Loch Shiel and is discovered to be immortal after being severely wounded on the battlefield by the Kurgan (Clancy Brown) After being banished from his village Macleod is found by Ramirez (Sean Connery) another immortal who befriends Macleod in order to teach him about the gathering and train him in order to win the prize and defeat the Kurgan.

The film skips between flashbacks of Macleod’s life in Scotland in the 16th Century, through the ages and to New York City 1985. The immortals are preparing for the gathering where the final battle will be fought by the last two and the winner will receive the prize. The only way the immortals can die is by having their heads cut off so swords are an essential weapon, also meaning there’s a lot of walking around with very cleverly concealed swords inside long jackets. 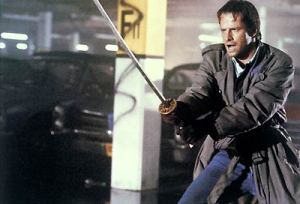 The sword choreography is highly watchable and over the top making it action packed and fun to watch. These scenes work in the same way as a martial arts movie, desperately waiting for linking dialogue to be over to get to the good stuff. The story is well conceived and despite a few plot points well executed, it flows relatively well, and unless you’re me, the story is pretty easy to follow.

I love the characters and the mythology behind them (something that was ridiculed and destroyed in the sequel rather than expanded upon and developed) and feel that it really should have been a standalone film and even has a perfect ending for it. I think Christopher Lambert does a brilliant job in bringing Conner Macleod to life as an iconic character. Given that English wasn’t his first language does a pretty sterling job at a Scottish accent, and also explains his non specific accent in the 1985 parts of the movie. He gives the character depth and potential for more “prequel esque” follow ups to the movie.

Highlander takes it charm from Lamberts portrayal and the urge to know about his past rather than his future. I think film makers after the first film forgot there was 450 years of history to explore behind this character. Sean Connerys’ inability to pull any sort of passable foreign accent out of the language hat is pretty amusing in any of his films, whether he’s playing an Egyptian Spanish metallurgist, an Irish cop or a Russian submarine commander, he’ll always have that Scottish accent in all its glory, but this is what we expect from Connery and he still plays a memorable and interesting character. Clancy Brown is awesome as the Kurgan and I wish this guy was in more movies, he really steals the scenes and becomes more and more animated and villainous throughout the film up to the final battle with Macleod.

I could probably gush about this film for a hundred pages but don’t worry I’m not going to go on too much longer, I 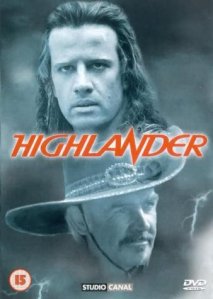 could go into the awesome Queen soundtrack or Michael Kamen score, but maybe in another post! I will however mention the blu-ray release of this film which inspired this review. The extras have remained more or less the same from the special edition release on DVD, however the picture is awesome. For a movie that’s 25 years old 99.9% of it looks and feels like it was filmed yesterday. Only one scene stands out as being as little crude, the high definition picture emphasises the use of special effects and if you look to the screen closely you can tell half the castle, the horses, hills and fields are a matte painting, not really noticeable on VHS or DVD. Considering this scene is about 3 seconds long you’re not really losing out on a great quality transfer for such an old film. Whereas film transfers to blu-ray such as Ghostbusters were a disappointment and in my opinion not worth buying the blu-ray for Highlander is well worth the purchase.

For more Highlander I would recommend the series from 1992 with Adrian Paul as Duncan Macleod which wasn’t too bad. I also like the 4th in the series of movies “Highlander: Endgame” which see’s Conner and Duncan crossing paths and tries to recapture some of the charm of the first film with flashbacks to Conners’ life in Scotland (although don’t expect too much continuity).

Great article and more in depth look at Highlander can be found here!

Hey all and welcome to my blog Reality Glitch.

This blog will cover the topics that interest and inspire me the most from the world of retro gaming and occasionally movies.

Thanks for stopping by and hope you enjoy!